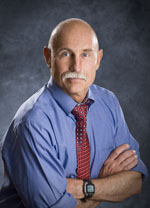 F. Ray Nickel, M.D., M.P.H. was raised in Southern California and participated in track, football and volleyball at the high school level and diving and volleyball at the college level. He graduated from the University of California San Diego with a degree in biology and was a member of the National Association of Intercollegiate Athletes National Championship Men’s Volleyball Team there in 1971. He subsequently obtained a Master’s Degree Public Health in microbiology and laboratory management at the University of Texas School of Public Health in Houston. He was the Regional Laboratory Director for the Texas State Department of Public Health in Midland, Texas for one year. He was class president at the University of Texas Medical School at San Antonio and graduated with honors in 1979.

He performed a five-year residency in orthopaedics at the University of California Irvine during the development of the use of the arthroscope for surgery of the knee. He presented one of the early papers demonstrating the accuracy of the arthroscope for diagnosing knee problems at the American Orthopaedic Society for Sports Medicine in 1983, and arthroscopic surgery and sports medicine has been a primary focus of his professional career ever since.

Following residency he completed a University of Southern California affiliated fellowship in Foot and Ankle Surgery including training at Rancho Los Amigos Hospital, an internationally renowned rehabilitation facility. Upon completion of his formal training, he joined the Ventura Orthopaedic and Sports Medical Group in 1985 to build a practice in foot and ankle problems, sports medicine and reconstructive surgery, including joint replacement surgery. Board Certification was completed in 1987 and re-certification in 1996 and 2006.

Since his arrival in Ventura, he was an instructor in the UCLA affiliated Family Practice Residency at the Ventura County Medical Center for 20 years. He has served on multiple local hospital committees, including the chairmanship of the orthopedic and procurement committees at Community Memorial Hospital and Chief of Medical Staff at Ventura County Medical Center. He has been president of the county chapter of the Christian Medical Dental Society. He has published articles in peer-reviewed journals and lectured nationally on such topics as arthroscopic surgery of the ankle and running and skiing injuries. He has reluctantly had to call a halt to his own running activities but has been able to assist with the medical care of the runners of the first and several subsequent Los Angeles Marathons and is the team physician of the football and other athletic teams at Ventura College.

Dr. Nickel is a member of several medical organizations, including the American Academy of Orthopaedic Surgeons, American Medical Association, California Medical Association, California Orthopaedic Association, the American Orthopaedic Foot and Ankle Society, the Alpha Omega Alpha Honor Medical Society and is a charter member of the Surfer’s Medical Association. He is Secretary of the Ventura Orthopaedic and Sports Medical Group.He has made trips to El Salvador and Mexico to provide orthopedic care and instruction.In “real” life, Dr. Nickel is an avid surfer who also enjoys alpine skiing, fishing, and backpacking when the surf is or is likely to be flat. He and his wife have raised three young adults in Ventura and continue to live there with their two dogs.”Almost nothing is as rewarding as having another individual tell you that you have made a great difference in their life. I have the privilege of working toward that goal every day, with every individual!”