This Surgery was the Best Decision I Made in My Life

My name is Cheryl Taylor and I have a Conformis implant

There is nothing like a long bike ride around the neighborhood or a competitive basketball game to clear your head. My passion for sports and physical activity was always an outlet for me to let off steam after work. I am a supervisor at the U.S. Post Office in Georgia and my job requires me to spend hours on my feet. I need to be in good physical shape. Even during my vacations, I have always left time for a daily pick-up basketball game. In 1987, I was playing a game overseas when I injured my knee. I am no stranger to sports injuries and just tried to deal with the pain. I kept at it for about ten years before I finally reached my limit.

Between 1997 and 2002 I underwent three separate knee arthroscopies. After each surgery, I told myself that this would be it, the one procedure that would relieve my pain. But that wasn’t the case. I went from being an athlete used to biking on tough terrain to someone who had knee pain when I put my foot on the pedal. The pain forced me to sit on the sidelines at basketball games. I traded in my focus on competition on the court to a new focus – facing daily challenges at home. My biggest opponent became the stairs. It was almost embarrassing having to tightly grip the handrail and turn sideways to climb up and down a flight of stairs. After years of trying to accept this as my new normal, I decided to meet with Dr. Levengood at Gwinnett Medical Center and get an MRI.

Dr. Levengood looked at my results and told me I would need a total replacement on my right knee. He also told me about a fully customizable knee implant produced by Conformis. The thought of another surgery and lengthy recovery period terrified me. What if I went through this whole process and still had pain? What if this was my last hope and it didn’t work? Would I ever get back on my bike or back on the court? I decided to try one last time.

During this process, a replacement knee was designed and produced exclusively for me. My surgery took place in January 2015. I was in shock when I was able to use a walker to go up and down the hospital halls just a few hours after my procedure. I was discharged the same day and returned home where a nurse helped with my recovery. My progress was going better than I imagined, but I tried to keep myself from feeling too hopeful after my past surgeries had let me down.

Then one day without thinking I simply walked up the stairs. I didn’t even realize what had just happened until I reached the top. I did not need to clutch the railing or turn to the side to take each step. I felt like my old self for the first time in years.

It has been about two years since my surgery, and the stairs are no longer my main opponent. I am back to facing talented players on the basketball court and am currently looking for a women’s league to join. Just the other day I went for a long bike ride, and even walked five miles with friends after work.

When I look back at my experiences, I wish I hadn’t tried so hard to cope with the pain for so long. It’s one thing to be tough on the court, but I feel like I missed a lot of my life during that time! If I had to go back and do it again, I wouldn’t even hesitate. I tell people this surgery was the best decision I made in my life. 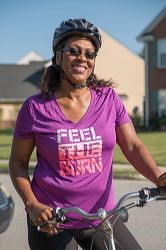